Hitchhiking through Laos: Getting stuck in a Brothel Town in the Middle of the Night

Sometimes stuff goes wrong. In fact, a lot of stuff will go wrong when you go travelling, and if you throw hitchhiking into the mix, the probability of something going wrong is pretty high.

Anyway, Felix and I had hitchhiked the short distance from Vang Vieng to Vientiane in Laos without much trouble. We spent the night in the city, enjoyed some bubble tea, and then set off early in the morning. A short bus ride took us beyond the city limits, and then we waited. And waited..

After about an hour, a lorry with Vietnamese plates pulled over. Thao Thinh and his co-driver whose name I have since forgotten were taking motorbikes from Vietnam to Thailand and despite a considerable language barrier, we kept each other entertained and even snapped a selfie! 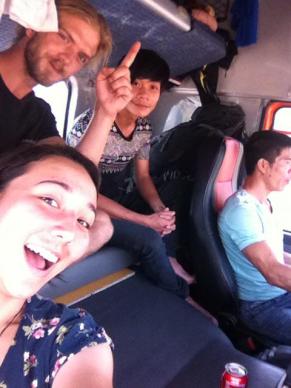 They dropped us off in Thakhek at about 8pm, which is where they would be crossing the border. It was dark, and we walked in the direction of human activity to find a small town with plenty of guesthouses but no vacancies anywhere. We tried several hotels and hostels, only to be turned away from all of them. Great.

“We might have to sleep rough, you know.” Felix said to me as we walked back to the central square to formulate a new plan. The air was warm and fragrant with the scent of meat buns steaming under electric lamps, and the locals were all outside enjoying the evening. We counted almost no tourists among the people around us.

About a minute later- no exaggeration- two Germans on scooters stopped beside us.

“Are you both looking for a place to stay?”

“All the Thais cross the river and come here for the prostitutes. The town is one big brothel. Hop on the back, we’ll drive around and find a place with you.”

Not quite believing our luck, we jumped on as the Germans drove around in search of a hotel for us.

“What brought you to Thakhek?”

“We’re hitchhiking to the south and this is just where we’ve ended up. What are you guys doing here?”

“We’re climbers of course. Great climbing in the area.”

We tried about four hotels before finding one with a vacancy about ten minutes out of the centre. The hotel was dark, and the owner took us through a hall full of stuffed moose heads and hunting paraphernalia to a room on a corridor that wouldn’t have looked out of place in a mental hospital from the 80s.

Still, the sheets were clean and the door locked from the inside. We thanked the Germans (who we bumped into again the day after in the central square- cool guys) and collapsed in relief on the bed. The clinical walls had odd stains on them, and I’m sure under a blacklight the mattress would have shone like a supernova, but beggars really can’t be choosers.

The next morning, after a short debate over whether we should go back onto the road right away, we decided to spend another day in the town doing the odd bits of maintenance that so often get forgotten when you’re otherwise occupied; sewing up the little holes that appear in your clothing, for example, or updating your blog.

Ultimately, we rather enjoyed our little impromptu stay there, and that’s without doing any of the interesting stuff that we found out about later- there’s giant cave systems with entire rivers running through them, a motorbike loop, rock climbing, and loads of Lao prostitutes if you’re so inclined. It’s a bit off the beaten track which is a bonus.

And the best thing of all is that I managed to find a stall doing Yakult flavoured bubble tea. Amazing stuff, and probably the closest we’ll ever get to tasting ambrosia.

“A rock pile ceases to be a rock pile the moment a single man contemplates it, bearing within him the image of a cathedral.”
-Antoine de Saint-Exupery